In a world of rising urbanization and middle-class consumption, the ability of food-and-beverage (F&B) stores to not only expand their presence to strategic locations but also to achieve the right synergy between stores is critical to business success. In this article we highligh the most-often sought out strategies used by F&B players to grow and manage their network.

Individual store evaluation
The attractiveness of a store is determined by its potential to generate enough sales to cover rents, cost of goods sold (COGS) and wages. Among these attributes, sales are the most difficult to forecast. International players such as Starbucks and McDonald’s have their own methodologies and databases to perform a top-down sale forecast from parameters such as population density, drive-through or footfall, which then is adjusted by a premium or discount for a dozen factors such as visibility, accessibility, commercial mix, parking and safety. For smaller players, purchasing Geographic Information System (GIS) data from vendors, or estimating the sales of the nearest competitor as a benchmark are equally viable options.

The next part of the store evaluation process deals with the costs. For COGS the brand’s average value could be used. For rents either the quoted value from the landlord or an average per-area price from real-estate reports are adequate. For wage calculations, the store area should dictate the figure, which can then be adjusted by a premium or discount if the expected footfall is higher or lower than a typical store. Finally, opening and equipment costs should be similar those of previous openings for the same brand.
With both sales and costs known, we can model the store’s P&L, IRR and expected payback. Each company may have a cut-off for IRR or payback that will decide whether the decision to open is a sound one or not.

Maximizing the network effect
In addition to justifying a store’s profitability, the business manager must also think of inter-store synergies. One internal synergy is the saving from shared transportation. For F&B categories where the shipment frequency is high such as fast-food restaurants, ice-cream parlors or bakeries, it is advantageous to place stores close to each other to minimize transportation costs and increase product freshness. Other internal synergies that can be realized with store proximity include staff training and rotation, store intelligence and compliance monitoring.

There are also external synergies that benefit from a dense network of stores. Having stores in key areas in the city can help raise consumer awareness and reinforce the brand image. A good example of this is Vietnam’s leading café chain “Highland Café”. It has a store in almost all shopping centers and major landmarks of major Vietnamese cities that it becomes the designated meeting point for young people. At the extreme, when the number of stores reach a hundred in a city and more than 20 cities in the country spanning multiple brands, the company begins reaping massive benefits from loyalty programs, gift cards and corporate contracts. An F&B company that made good use of its ubiquitous presence is Huy. With more than 200 stores across 9 brands (Món Huế, Phở Ông Hùng, Great Bánh mì & cafe, Cơm Thố Cháy, Phở 99, Iki sushi, Shilla Korean BBQ Restaurant, TP Tea, and Mì Quảng Bếp Tâm), the company’s membership and prepaid cards are immensely popular. A corporate client can purchase Huy’s 20%-discount cash cards for corporate events and business trips, which can be used in Huy’s densely-placed restaurants present in 5 large Vietnamese cities. (Ha Noi, Ho Chi Minh, Hai Phong, Quang Ninh, Dong Nai).

One key point to watch out for when managing the store network is cannibalization. This happens when stores are placed too close to each other and the new store takes customers away from the old one. On the other hand, cannibalization can also be used against competitors. By having three to four stores encircling a strategic location, a player can crowd out the market so that a new player cannot possibly justify opening a new store in the vicinity. 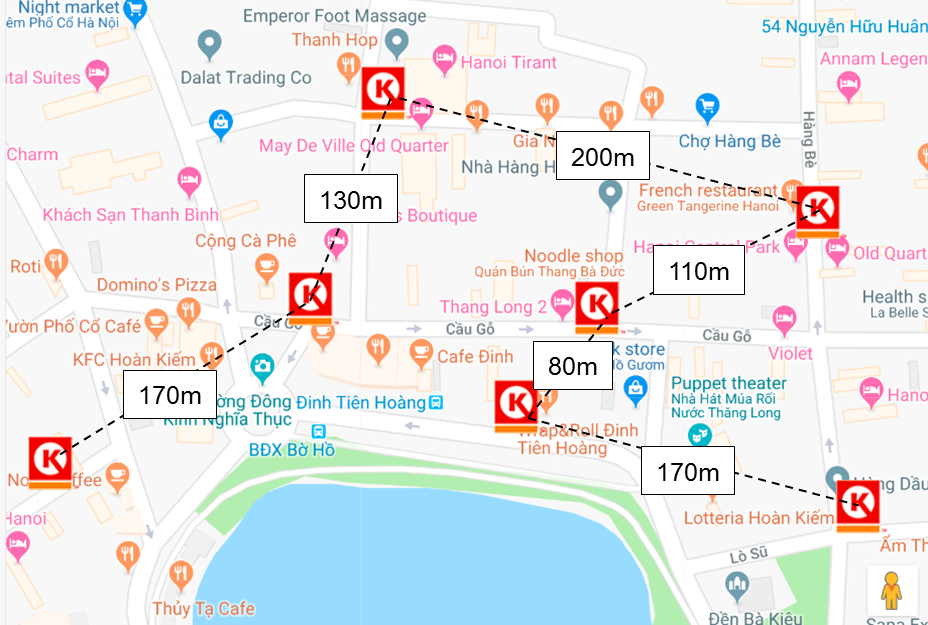 Mastering off-site channels
In addition to telephone orders, the recent IT revolution has helped off-site sales contribute more to a chain’s total revenues. This shift has come about thanks to the rise of restaurant review sites and transportation startups. Consumers now value the convenience of food delivery, while transportation costs have decreased greatly thanks to the sharing-economy model that is popularized by companies such as Grab.

In this context, a new store must play its role in servicing an area that is not yet adequately covered by the current network. Our research has shown that F&B chains in Southeast Asia often place stores in 2-6km distance (or an equivalent of 4-10 minutes of traveling time by motorized vehicles) from one another. Stores are spread out in grid-like positions throughout the city, as in the map below. 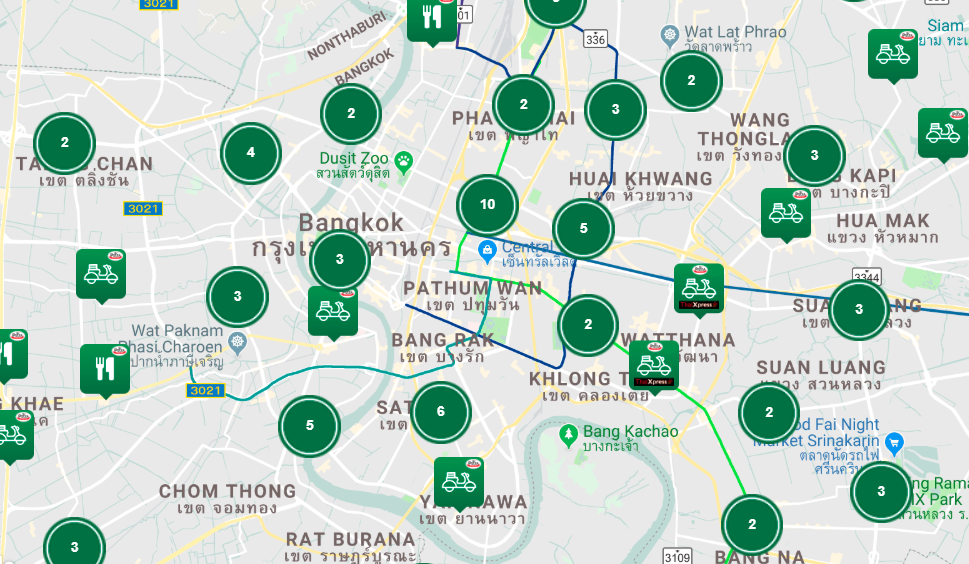 [Locations of The Pizza Company in Bangkok, Thailand]

For low-end F&B players, online sales will play a more important role as stores placed in the city peripheries serve as excellent gateways to service customers in the city center.

Conclusion
As business managers, it is advantageous to consider the P&L of the entire chain and not just individual stores when evaluating a new opening. At the same time, both onsite and offsite sales should be studied carefully to maximize the benefits from the strategic locations of stores.