Over the past decade, the condominium market in Thailand has been growing at a rapid pace, especially in Bangkok. While condominiums in Thailand only account for 2.4% of Thai households (NSO Census, 2010), they are the by far the fastest growing category of residential property in Thailand. According to AP, Thailand’s leading property developer, despite its relative scale condominiums account for almost 60% of total residential property launches in 2016. However, there are signs of demand slowing down ever since Thailand faced its political upheaval in late 2013.

More recently, there is a trend of increasing joint ventures between Thai and foreign developers, most notably with Japanese developers. Starting from 2013 in a joint venture between AP and Mitsubishi Estate, by the beginning of 2018 the combined value of joint venture projects exceeds THB 200 billion (USD 6.4 billion).

In this report we will cover the state of the Thai condominium market with a focus on Bangkok, and the reasons for the upward trend of joint ventures between Thai and Japanese developers.

Condominium Market in Bangkok, an Overview

While condominiums are built all over the country, Bangkok has the highest concentration of condominiums by far. According to Pruksa Real Estate, condominiums constituted 51% of total private households in Bangkok metropolitan area. While different sources disagree on the exact figures, as of 2017 there are an estimated 500,000 condominium units in Bangkok, compared to less than 100,000 in 2008.

Demand for condominiums as a form of housing in Bangkok increased steadily until it plateaued in 2013 (fig. 1), and the rate of condominiums sold is currently between 70 – 75%. 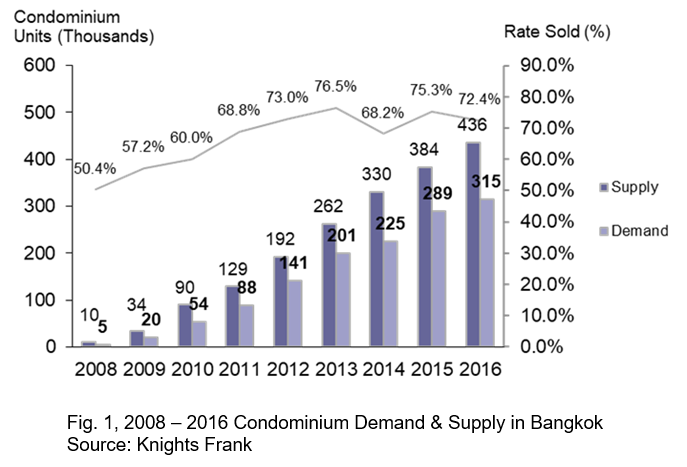 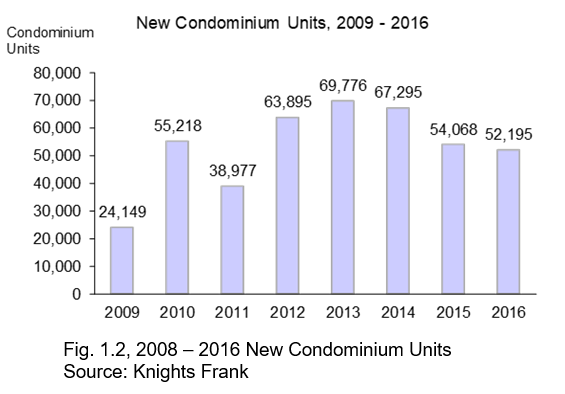 Aside from the sharp dip in condominium supply in 2011 – a result of a severe flood in Thailand – new supplies of condominiums were produced at a rapid pace, and demand along with it.

But starting from late 2013, political turmoil and government dissolution in Thailand reduced consumer confidence in the market, and the demand for new condominiums tapered.  Additionally, rapid increases in household debt as a % of GDP in Thailand (52.4% in 2008, up to 79.9% in 2014) led to tightened lending criteria by financial institutions.  Loans were especially strict for freelancers and SME owners, who have irregular incomes. 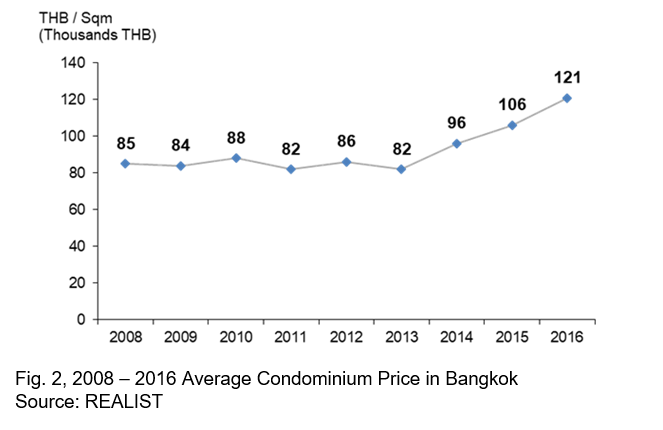 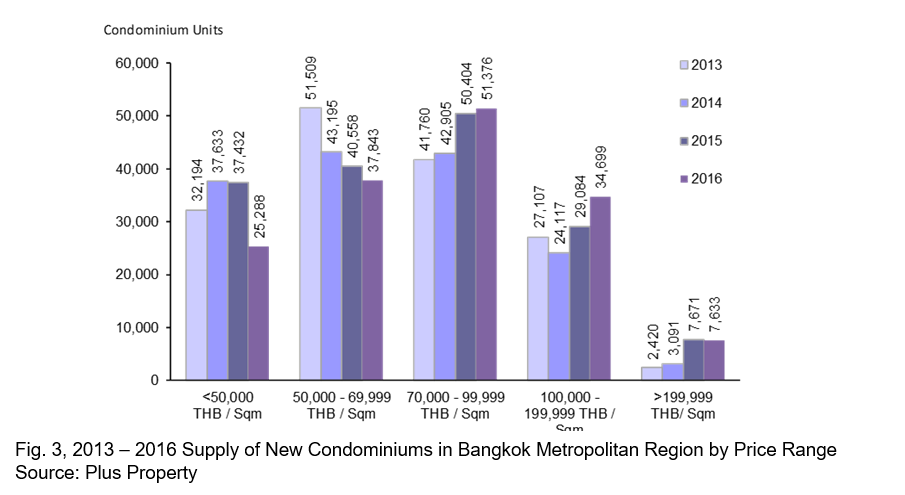 Condominium in areas outside of BKK 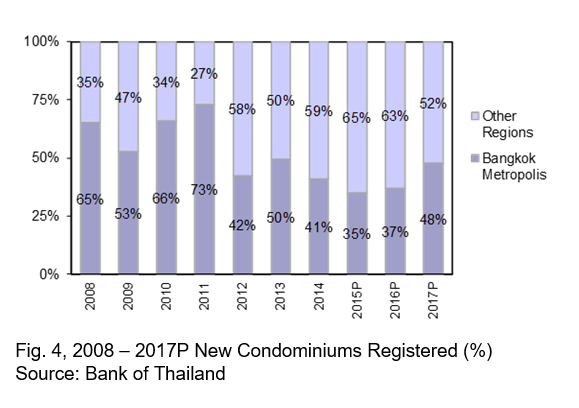 Over the past few years interest in Thai properties have increased, primarily used as a place of residence rather than as a form of investment.  Purchases of Thai condominiums by foreign buyers rather than institutions have increased by as much as 700% between 2012 to 2017.

The most popular regions, given they are mostly for personal use, are in metropolitan regions such as Bangkok, and seaside destinations such as Phuket, Chonburi and Huahin are the next top 3 most popular locations.
Many condominium developers are targeting this trend: Sansiri, a top Thai developer, has a THB 7.5 billion sales target for foreigners, out of a total of THB 36 billion in 2017. 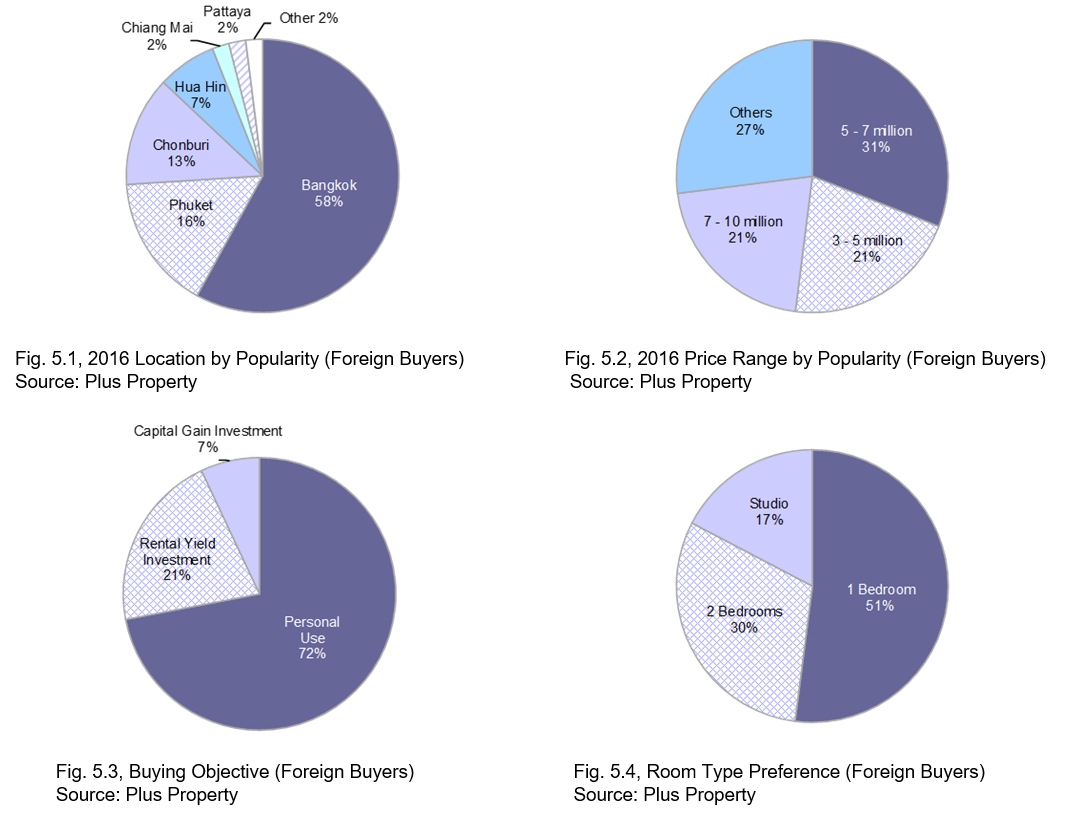 To boost their condominiums’ demand among foreigners, many developers are moving towards a joint venture with foreign – especially Japanese – developers for their knowledge and reputation for quality.

The reason is that Thai banks are becoming more conservative in their lending to the developers, resulting in Thai developers looking elsewhere for sources of funding.

The trend in rising joint venture investments is likely to continue: starting from 2018, Ananda announced they have new joint venture projects with Mitsui planned worth THB 19 billion, while AP announced they will invest in 4 new condominium projects in 2018, with a combined value of THB 23 billion.

While other countries – most notably China – have started joint ventures in condominium development in Thailand as well, joint ventures with Japan are the largest by far in scale. 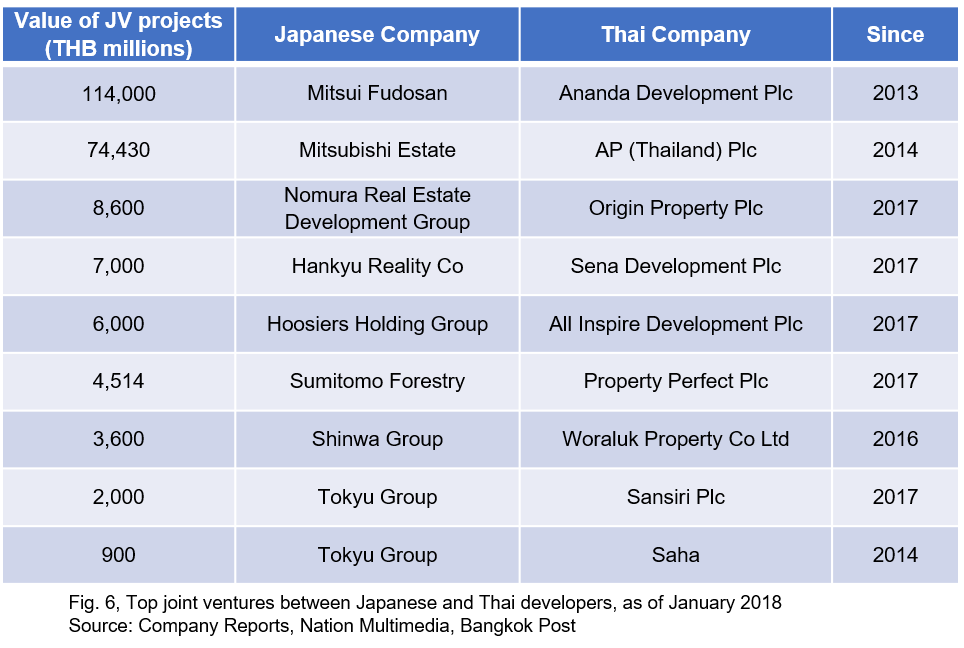 Ananda Development and AP have invested the most by far in joint ventures with Japan, with combined values of their JV projects almost reaching THB 190 billion by the end of 2018.

Mitsui – Ananda
At the time of writing Ananda Development has 15 joint venture projects with Mitsui Fudosan, starting from 2014.  Ananda Development holds 51% while Mitsui Fudosan’s subsidiaries hold 49% share of the joint venture companies.  While Ananda is responsible for managing the JV projects Mitsui is responsible for technology / knowledge transfer as well as training Ananda’s staff to Mitsui’s standards.
By February 2018 the combined value of the joint venture projects is at THB 95 billion, with aims to be at THB 114 billion by the end of 2018.

Although the change from negative to positive in profitability from 2012 to 2013 is more significant, there is an observable positive effect in the period that Ananda Development started the joint venture with Mitsui.  After JV projects with Mitsui Fudosan has initiated, profitability increased from 9% to 13%, and stayed at above 10% after 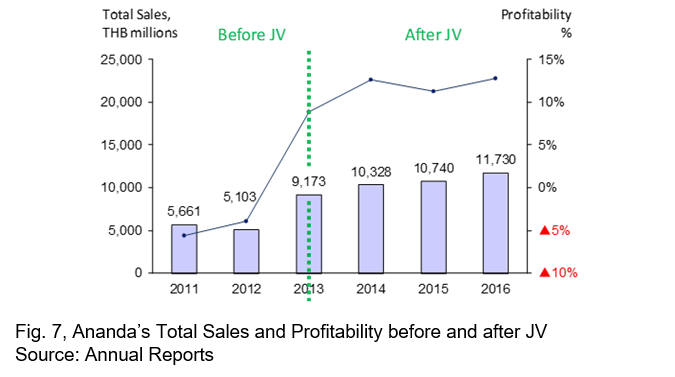 Mitsubishi – AP
In 2013, AP is the first Thai company to have a joint venture in condominium development with a Japanese company, and by the end of 2017 AP has 11 joint venture projects with Mitsubishi Estate.  Similar to Ananda, AP holds 51% of the subsidiaries that manages the condominium projects.

Second to Ananda – Mitsui, by the end of 2018 their combined value of JV projects with Mitsubishi estate is at THB 74 billion.
After the joint venture with Mitsubishi has initiated, totals sales for AP increased in 2014, before trending downwards over the next 2 years.  However, their profitability was not affected, but remained at the same rate as before starting their joint venture.
It is notable that their profitability is around the same level as Ananda, whose profitability increased significantly to AP’s level after their first joint venture project started. 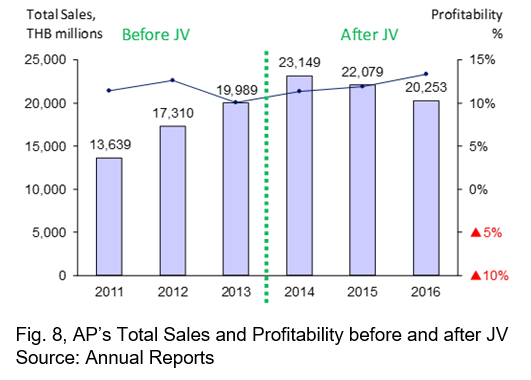 While the condominium market in Thailand appears to be slowing down since 2014, the market is adapting, and is still reasonably healthy.  Although domestic demand has somewhat stalled it is alleviated by increased interests from foreign buyers, many of whom are interested in buying for personal use, rather than to rent out.  As ideal locations to build in Bangkok become scarcer, prices will rise further and condominiums outside of Bangkok will become more viable both for residential use, and as an investment vehicle.
With the increases in foreign companies’ interest within the market, quality in condominiums are sure to rise, and will be more competitive on the global market.

Door to Success of Your Business in Japan