The Thai market to watch and their players: Generation Y – the driving force of consumption trends in Thailand

The Thai market to watch and their players

Generation Y – the driving force of consumption trends in Thailand

We at CDI-Thailand discuss the various socioeconomic issues of Thailand and ASEAN related to Thailand’s noteworthy market and its players.

In this article, we would like to discuss the driving force of Thai consumers’ trend.

Those in Generation Y are currently in between late teens to the early 30s. 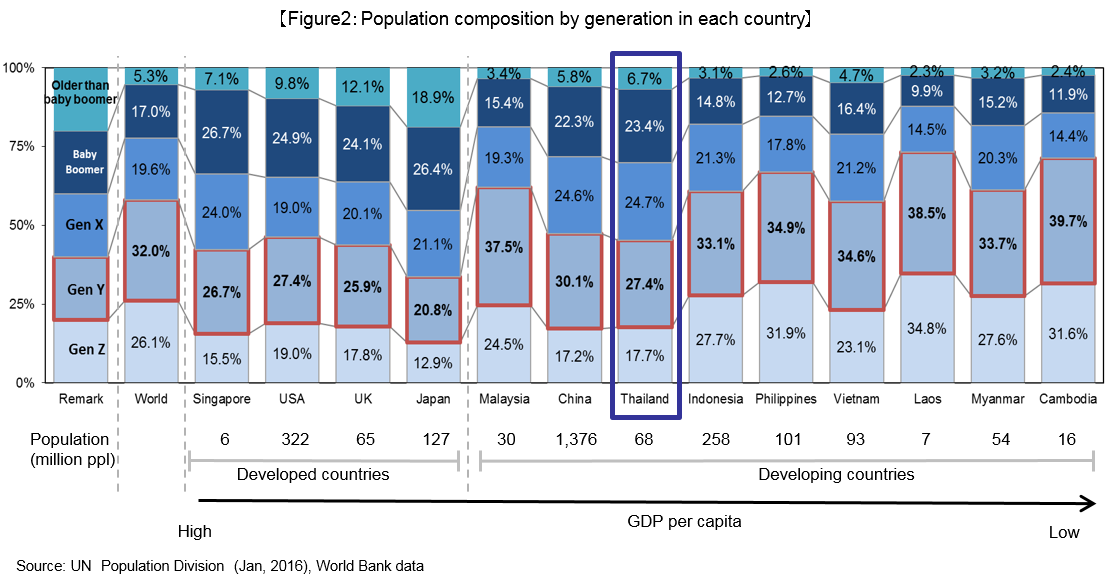 As Thailand’s total fertility rate decreases to 1.4 in 2013, the importance of capturing Gen Y’s tastes becomes paramount in order to compete in the Thai consumer market.

Next, we are going to consider Gen Y’s characteristics. 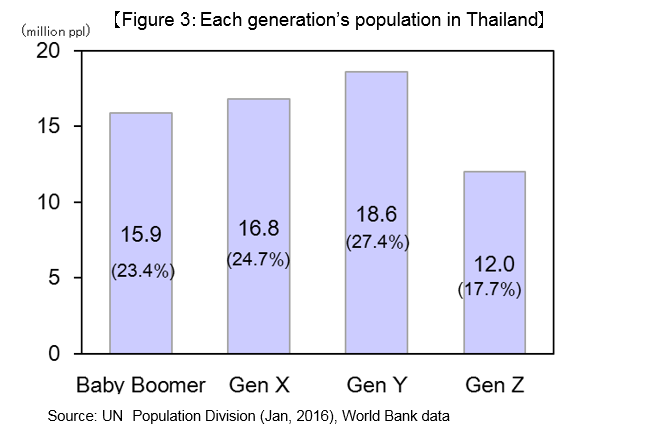 CDI has extracted 5 different factors that represent Thailand’s Gen Y characteristics, of which “Private and Social” is the center.  That is to say, while they emphasize their own distinct personalities and values, at the same time they connect with “real and virtual” communities and their surroundings, wishing to gain approval and praise.

The other factors are derived from “Private & Social”, as a specific preference

The current state of characteristics as described comes from the advances in technology and the explosive growth in the volume of information that accompanies it, as well as the economic and social changes in Thailand.

For instance, based on Maslow’s (psychologist) hierarchy of needs, we would like to have a look at the “increase in needs” as a result of economic development. Maslow divides a human’s innate needs into 5 different stages.  His theory is that as basic “physiological” needs (like food and shelter), and “safety” (to live without fear of danger) are fulfilled, a human being would go then need “love / belonging” (to be in a group of friends) and then “esteem” (to be recognized by others, to be respected), and so on.  A developing country that is experiencing economic growth is one that is also advancing up the stages in the “pyramid of needs”.  Thailand (in particular, Bangkok) has its lower stages in the pyramid fulfilled and has growing needs in the higher stages, in love / belonging and esteem.  Vehicles that only served as a means of transport and movement become a means to express one’s individuality; meals that served to starve off hunger and to give one energy becomes a form of enjoyment, as well as a means to show off one’s tastes and status.

Now, let us look more closely at the specific preferences of Generation Y.

Although their income level is lower than the Baby Boomers and Gen Xers, due to their high propensity to consume Gen Y’s contribution to the consumer market is large.

The Gen Yers of Thailand like to stay connected; they make posts and share them on Facebook, Instagram and Lifelogs.  Over 50% of the Thai population are signed up on Facebook.  Furthermore, with regards to time spent on social media, Thailand is even higher than Japan.

Even when buying things they will collect information through social media, and make sure to not miss out on popular products. 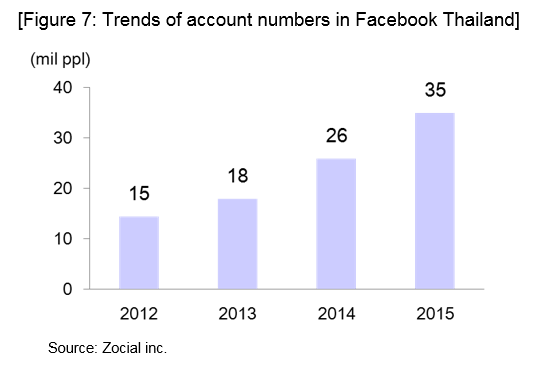 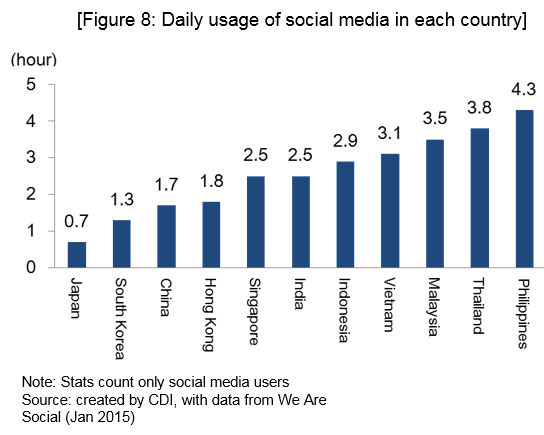 Even the cafes are places for the Gen Yers to “connect”.  It is a common sight in Bangkok – within cafes with wifi – to see Gen Yers in front of a laptop, having an animated discussion on various topics – be it business or personal.

Such cafes are no longer found in Bangkok alone, but are becoming more common in other urban areas such as Chiang Mai. 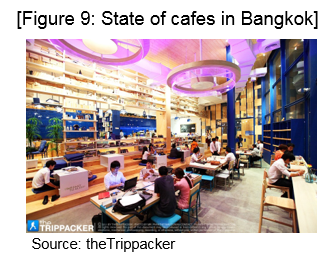 Next we will introduce products that are currently popular between the Gen Yers.

In Thailand, large bikes are collectively referred to as the “Big Bikes”, and have gained popularity from the young.  The bikes are seen as a vehicle that expresses their individualities, and one that they can enjoy riding, rather than a simple means of transport. The biking communities are very active, with riding events being held often in various places.

It is a small submarket considering the overall bike market, where approximately 2 million bikes are sold annually in Thailand. However, as the bike market is becoming saturated, companies are paying more attention to these submarkets where there is a lot of potential in growth, along with a high unit price.

For the Gen Yers who post their Lifelogs on social media, beauty cameras are a required item.

Companies are developing cameras with LCD screens and camera corrections functions as a selling point, which makes selfies easier to be taken. Popular examples for the Thai Gen Yers include the Casio TR/ZR series, and Fuji Film X-A2, X-T10. 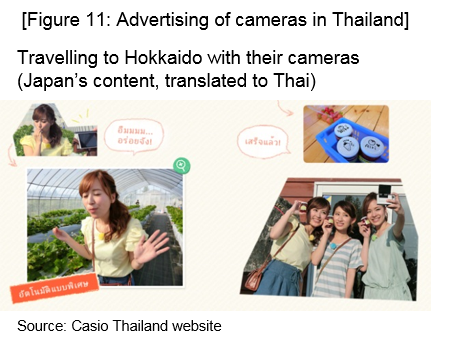 When it comes to the Generation Y, who are Boom Sprinters, the ability to create a trend becomes important. It is important to prioritize some resources in marketing through social media, more so than unilateral mass advertising. For example, Lay’s brand potato chips has put an image of the lower half of a face on their packages (Figure 12). This results in many Thai people uploading their selfies with such packages on their Facebook and Instagram pages.

When it comes to social media, Thailand should be considered to be a developed country, even more so than Japan. In general, with regards to consumer goods, food and beverages, localized marketing is effective.  As such, in these markets it is important to be mindful that what is considered to be “common sense” and “advice” from Japanese headquarters do not distort localized marketing in Thailand.

On the other hand, the rapid spread of negative information is also characteristic of a market so intrinsically linked with social media.  For example, in the baby diapers market in 2015, a mother made a post on a popular Thai forum Pantip.com, stating that after counting the number of diapers in a package, there were 2-3 less than advertised on the package.  On the same day, mothers all over Thailand also counted the diapers they had, and it emerged that many producers of baby diapers sold their products with diaper content less than stated on the package.

The survey by Siam Commercial Bank (SCB) on the Gen Yers’ work styles suggests that Generation Yers are strongly individual-oriented, or alternatively they have a preference to “take everything”. They desire evaluation on their individual ability (in which their earnings will reflect), and have a tendency to change their jobs often. In contrast, baby boomers and Gen Xers tend to focus on company’s stability and trust, (non-monetary) evaluation and recognition.

It seems that Gen Yers, with their preference for individualism, do not have a sense of belonging or loyalty to their companies. With regards to that point, their “target” of belonging is not the entity called “company”, but rather the people, the groups that work within the company themselves.  According to the survey mentioned earlier, a factor cited to be the most influential in motivating them to work is “an attractive colleague” (52%). (41% responded to “performance-based compensation”, characteristic of Gen Yers.) Furthermore, as a method of learning, 53% prefers OJT (on-the-job training), which suggests an expectation to learn a lot from their superiors and peers (51%).

Generation Yers are those that reflect the “now” in Thailand, and have different tastes compared to other generations. It is important to gain careful understanding of their characteristics, and build measures that are flexible to respond to such characteristics and needs.