The Café Market among 5 ASEAN Countries

The Café Market[1] among 5 ASEAN Countries

In recent years, there has been an accelerated growth in the ASEAN café market showing its potentials for local as well as international café brands to continuously exploit. In the region, five highlighted markets are Vietnam, Malaysia, Thailand, Indonesia and the Philippines, (hereunder referred as TIPMV) due to their dominance in sales value compared to others. Together, these five markets make up about 6.5 MUSD, an increase of 8% in 2014.

One of such factors is the difference in alcoholic vs. non-alcoholic consumption culture of the people in the five countries. In 2014, there were 8,165 outlets of bars/pubs in Thailand with total sales of around 6.3 BUSD, occupying more than 90% sales of the whole foodservice industry[3]. This figure is significantly far ahead of Vietnam and Malaysia with 26% and 34% respectively. Especially, the popularity of beer gardens among Thais also contribute to its 1st rank in 2014 among ASEAN countries in alcohol consumption.In figure 1, it can be clearly seen that among the five markets examined, Vietnam is the largest cafés market followed by Malaysia. Furthermore, although Indonesia and the Philippines are similar in size, whilst the former shows a high potential due to its exceptionally high annual growth rate but low per-capita consumption in 2014, the latter has less potential. Finally, Thailand holds the last position in terms of market size.

In addition to drinking habits, we can also consider the difference in price levels across the countries to see whether it contributes to the varying consumption levels. Figure 3 presents the USD unit price converted from the local currency price (2014) of a 16oz (500ml) Cappuccino cup of leading players[4] in each of the five countries. As expected, the unit price in Vietnam and Malaysia are overall higher than Thailand except Starbucks which is classified as a high-end product. This could explain why the amount spent on cafés per person in Vietnam is higher than in Thailand.

Moreover, we also look at the product portfolio and extra services offered in café (including general café and specialist coffee shop) across five countries. A considerable difference found is that in Vietnamese cafés, additional services (especially within the independent segment which occupies a major proportion of market) captures a major revenue share. For example, customers are likely to enjoy breakfast, lunch, live music at night and 3D movies together with beverages. These services incur additional costs, contributing to the relatively high consumption per capita of Vietnamese market compared to that of Thailand.
Next, we look at the competitiveness within each market. Figure 4 below shows the market share of the chained cafés segment in each country broken down by whether the companies are local, non-local ASEAN, or an international group (such as Starbucks). As you can see, the Philippines is the most concentrated market with 96% market share belonging to top 10 players whereas Malaysia is the most fragmented market. On the other hand, whilst local companies dominate the Vietnamese market, international players has a strong presence in the Philippines. Lastly, while ASEAN brands (such as Black Canyon and Bengawan Solo Coffee) have a weak presence overall, it is in Indonesia where they still command a sizable operation (5% market share). 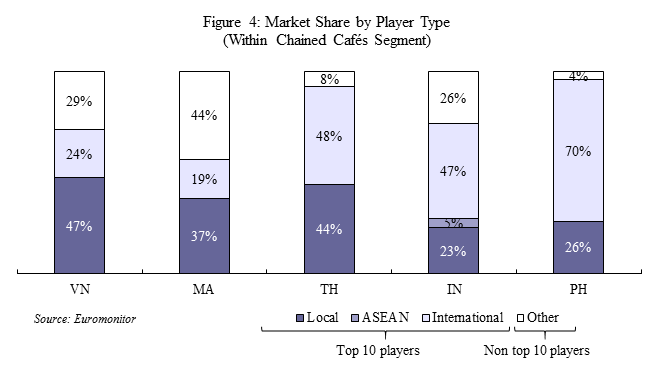 In this part, we break down the café market in each country using two axes: general (café) versus specialist (coffee shop and juice/smoothies bar) (Figure 5) and independent versus chained (Figure 6).

We see in figure 5 that across the five countries, general establishments occupy around 75% of the café market. Vietnam has the largest specialist shop segment in monetary terms (646 MUSD), but Thailand has the highest concentration of specialist stores (50%). On the opposite side of the spectrum, general cafés (coffee with other entertaining services such as music and 3D movie) are the most preferred in Malaysia, contributing to more than 80% of the country’s total market size.

Furthermore, we see in figure 6 that independent stores still dominate the market (72% in the entire region). The two countries at the two ends of the spectrum are Vietnam and Malaysia, where the penetration of chained stores are at 3% and 50%, respectively. One reason for this trend is the higher urbanization and modern trade penetration rates of Malaysia, which is linked to the earlier entry of international chained brands as well as the development of local ones. On the other hand, Vietnam has a very French-inspired coffee culture dominated by a large number of family-owned sidewalk cafés, presenting a big challenge for international chains looking to enter. As such, by 2008 Starbucks has already opened its 100th outlet in Malaysia whereas it debuted in Vietnam only in February 2013. 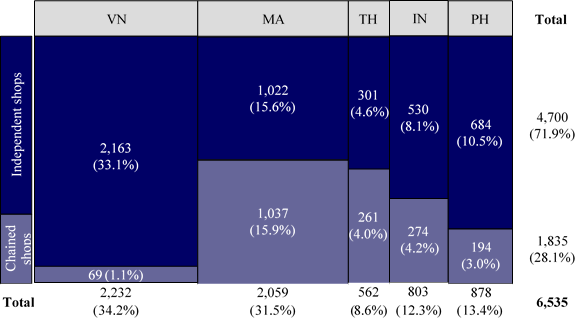 Figure 7 provides the summary of the financial situation of five countries’ highlighted companies. In overall, the revenue ranges from about 30 MUSD to 120 MUSD with clear hierarchy. The top level includes the groups and companies operating beyond the coffee shop segment such as Old Town, Eur-Med Laboratories, Starbucks and Trung Nguyen. In contrast, Secret Recipe Cakes and Black Canyon are two local firms at the lower level with dedicated café business. However, when we look at growth rates, Black Canyon is second fastest growing player whereas two other companies at the top level namely Old Town and Euro-Med Laboratories registered negative growths.

The most interesting company is Secret Recipe who has the lowest and decreasing revenue but earns the highest return for the shareholders. This might be explained by a huge improvement in cost management leading to an increase in profit margin from 6% in 2013 to 21% in 2014 (Figure 9). In other words, although Secret Recipe is limited by its size (small revenue), its profitability makes it a formidable player in the market.

On the other hand, Rustan Coffee (the authorized licensee of Starbucks in the Philippines) and Black Canyon (Thailand) Co., Ltd attain a relatively high ROE despite the exceptionally low profit margin. The main reason for this fact is the high use of debt financing although they are also asset-efficient. At the bottom end, it is Euro-Med Laboratories that generates the least return for their equity shareholders due to the poor capability in asset management.

The last part of this report is a brief profile of four local companies with outstanding performance in the café market and one international group (Starbucks Coffee Corporation). The reason to include Starbucks into this part is due to its massive store networks all around the world, and ASEAN is not an exception with Starbucks’ presence in all five examined markets.